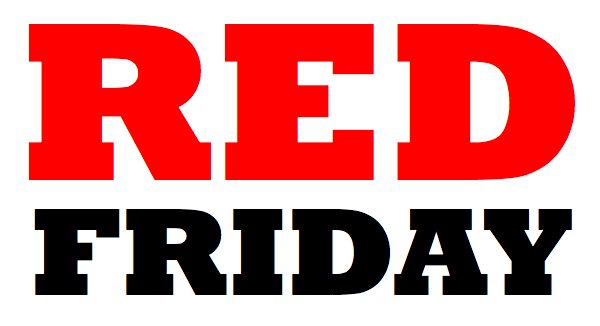 Are Black Friday sales getting you into the Red?

Think of it as Red Friday: just another trick to drive us into more debt.

Are you getting pulled in by all this Black Friday hype?

Ant Bullock from Do Something Different - the company inspiring millions of people to do something different one Do at a time and creator of Do Money - interviewed me to ask why we're so likely to be pulled in by Back Friday and what we can do to resist. Here's an extract of our conversation:

Q: Why is something like Black Friday so powerful?

Simonne: “Sales and discounts are based on a behavioural economics concept called ‘anchoring’. The idea is that you see the price that it (apparently) used to be and your mind anchors that as the true value. Paying less is really attractive. And anything less than the anchor price is exciting.”

“Add a limited time period and a few really big headline discounts that only apply to one or two items, and you suddenly have a really compelling formula that makes us want to buy. As soon as you hear ‘Black Friday’, or ‘January Sale’, you have the idea of buying in your head. It’s almost like you’ve already spent before you shop. For some people, just reading this will put the “Buy” signal in their head.”

Q: Is it a bad thing to take part in Black Friday?

Simonne: “It’s fine if you genuinely need or want the things on offer and you can really afford them. But if you just get swept up in the ‘fear of missing out’ frenzy whipped up by advertising and promotion, it can be really damaging.”

Q: What can we do to resist?

Simonne: “If you feel yourself getting sucked in, think about it as Red Friday. A day piled high with debt. Imagine the clever marketing people who get paid to trick you into spending more than you meant to. We’re being manipulated by them to spend money to enhance our lifestyle, even though most of us have more than we need.  Don’t be one of the ones fooled by this trick.

Q: Why is personal spending so difficult to control for some of us?

Simonne: “Most of us assume that when we buy things, we’re being driven by needs and rational choice. But behavioural economics proves that we’re conditioned to often make completely irrational decisions when it comes to dealing with our money. Our capacity to make the right decisions is heavily influenced by our emotional relationship with money.”

Q: Do we all have an emotional relationship with money?

Simonne: “The decisions we make about spending are often driven by our emotional needs, which can highjack our common sense. They are so unconscious that we rarely stop to reflect on them. People buy for all sort of reasons without realising it: to boost self-esteem; for status; to be part of the pack; to feel good; as a token of love; out of boredom; as a reward; as a form of control…”

“Compulsive shoppers describe getting a buzz from buying. Bargains provide a real endorphin hit. But it’s short lived – only temporarily filling an emotional void. By the time they’ve got home, the buzz has gone and is often replaced with a deep sense of guilt and regret.”

Q: Where does this relationship with money begin?

Simonne: “Much of how we spend is based on automatic beliefs and habits which were formed as we were growing up. Perhaps your friends had the latest toys that your parents didn’t buy you, so as an adult you’re determined to be the first with every gadget. Or your parents gave you expensive presents as compensation for not being around much, so you associate spending with love.”

“The tricky thing about money is that it’s one of the last remaining taboo subjects, yet we’re all affected by it. We rarely talk about it and our relationship with money is kept secret, even from ourselves.”

Q: OK, so how can we resist spending, particularly given that Black Friday, Cyber Monday, Christmas and January Sales are all looming?

Simonne: “Let me stress again if you can afford it, you enjoy it and you really want or need those new shoes or that new computer, that’s fine. Go for it.

“But, If you know you’re the kind of person who is susceptible to the bargain hype, or you often end up with that awful credit card statement at the end of January – here are seven things I think can help you:

Find out more about Do Money - Do Something Different's behaviour change programme that I had a small part in creating - designed to help you change your money habits.